Thursday morning a series of explosions ripped through a crowded market in Urumqi, capital of the northwestern region of Xinjiang, killing 31 people and injuring 94. The incident was labeled a “violent terrorist attack,” and President Xi Jinping vowed to “severely punish terrorists and spare no efforts in maintaining stability.” It was the deadliest incident in Xinjiang this year, and it follows a series of attacks across the country carried out by members of the region’s Uighur ethnic minority, some of whom want Xinjiang to break off from China to become an independent East Turkestan.

Until recent years, Uighurs made up the majority of people in Xinjiang. Yet years of migration by the Han, the dominant ethnic group in China, meant that by the 2010 census, the Turkic-speaking, mostly Muslim Uighurs made up less than half of the region’s 22 million people, with the Han Chinese approaching parity after making up only 6.7 percent of Xinjiang’s population in 1949, the year the Communist Party established its rule over China.

Those population shifts play in to how the government in Beijing sets its policy toward the region and how it will deal with the surge in violence, according to Gardner Bovingdon, a professor at Indiana University who in recent years has been refused visas to China. Professor Bovingdon is part of a group known as the “Xinjiang 13,” who contributed to an edited volume in 2004, called “Xinjiang: China’s Muslim Borderland,” that provoked the ire of the Chinese government. In an interview, Professor Bovingdon discussed Chinese policy toward Xinjiang and possible courses the government and the people of the region may take.

Q.
What are your thoughts on the cycle of violence and government actions in Xinjiang?

A.
People want to know whether this is evidence of greater organization and a sort of crescendoing plan for Uighur separatists, and I think it is premature to conclude that, and I’m particularly skeptical of Beijing’s claims that these events are all tied back to the Eastern Turkestan Islamic Movement, which I’m not even convinced exists in its former capacity anymore.

Beijing wants to say all Uighurs who want independence are separatists and terrorists. As you know, in Chinese we’ll refer to dong tu (东突) for Eastern Turkestan, as if everyone who believes in East Turkestan, everyone who seeks independence for East Turkestan is allied with these Islamic movements. This is decisively not the case. The only organization that the United States and the U.N. have identified as a terrorist organization is the East Turkestan Islamic Movement, which was identified in 2002. And I think that’s the main reason that Beijing keeps tying things to that organization.

Q.
So it’s not true that these attacks are being planned from outside of China?

A.
The Chinese government still maintains an idea that the government can and should control the media, that it should use its capacity to produce propaganda to tell the story it wants and to suppress stories it doesn’t want. I fear that the people out there — and there are some people who have been happy to say the threat of Uighur terrorism is increasing, this is clear evidence that E.T.I.M. is in league with Al Qaeda and other organizations — I fear that those people are basically keeping their bread well buttered by fomenting the threat of terrorism, which serves their interest as it does Beijing’s.

Q.
Do the increasing attacks reflect an increase in frustrations in Uighur society?

A.
These particular attacks to my mind bespeak a small group committed to violence possibly motivated by religious beliefs. The available evidence, of which I’m skeptical, suggests that. But that there is no way of connecting their actions and their attitudes with those of the general Uighur public, which is why I still go back to what I have written for years, which is there is abundant other evidence that most Uighurs are unhappy to a lesser or greater extent with the policies that Beijing has enacted. And, in fact, on any given issue, if you think about what Uighurs were critical of when I was there a decade or more ago, Beijing has moved against Uighurs’ expressed wishes: It’s cracked down further on religion, it’s cracked down further on language, further oppressing family planning policies and so on.

I think it’s hard to deny that there’s widespread Uighur discontent. I think it would be a mistake to say more bombings, more stabbings means that’s direct evidence that Uighurs are more dissatisfied.

Q.
What’s the endgame for the militants?

A.
What would be the long goal of this? The French had a term for this in Algeria — politique du pire — the politics of the worst. If I commit violence now, the government will crack down, and this will increase discontent among most Uighurs, and therefore in the long term it is probably likely to contribute to a groundswell of even greater dissatisfaction and possibly more widespread action even beyond the reach of those organizations.

What are Beijing’s calculations? I think it is trying to play a very challenging game. On the one hand it needs to condemn acts of violence. It needs to reassure the population and in this case primarily the Han population in Xinjiang, because these attacks are clearly targeting places where Hans predominate. It needs to reassure them that it is capable of restoring peace and averting further violence, and it also needs to send out a message that we’re only criticizing, we’re only attacking, that fringe of Uighurs who do not represent the majority and who are terrorists.

Q.
How do you see this playing out?

A.
To a substantial degree, Beijing has given up on the idea of converting all Uighurs into happy, complacent Chinese citizens fully supportive of the Chinese identity project.

There’s no way that Uighurs are going to raise a true military threat. There’s no way they can credibly try to separate now, unless of course there is a crisis of governance in the center of China, in Beijing. But, on the other hand, being in the endgame doesn’t mean that they can avert further acts of violence. One of the most important implications, one of the biggest questions for us looking into the future, is what do that preponderant Han population, possibly majority, in Xinjiang make of all this? Do they think, ‘I will continue to stay here, I will continue to tell my cousins this is good place to do business’ and so forth? Or will people begin to fear, and leave? 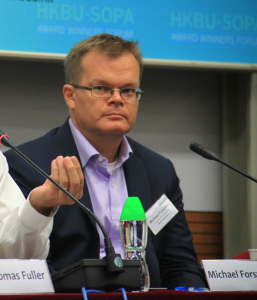