Imagine that this is your daily life: While on your way to work or on an errand, every 100 meters you pass a police blockhouse. Video cameras on street corners and lamp posts recognize your face and track your movements. At multiple checkpoints, police officers scan your ID card, your irises and the contents of your phone. At the supermarket or the bank, you are scanned again, your bags are X-rayed and an officer runs a wand over your body — at least if you are from the wrong ethnic group. Members of the main group are usually waved through.

You have had to complete a survey about your ethnicity, your religious practices and your “cultural level”; about whether you have a passport, relatives or acquaintances abroad, and whether you know anyone who has ever been arrested or is a member of what the state calls a “special population.”

This personal information, along with your biometric data, resides in a database tied to your ID number. The system crunches all of this into a composite score that ranks you as “safe,” “normal” or “unsafe.”Based on those categories, you may or may not be allowed to visit a museum, pass through certain neighborhoods, go to the mall, check into a hotel, rent an apartment, apply for a job or buy a train ticket. Or you may be detained to undergo re-education, like many thousands of other people. 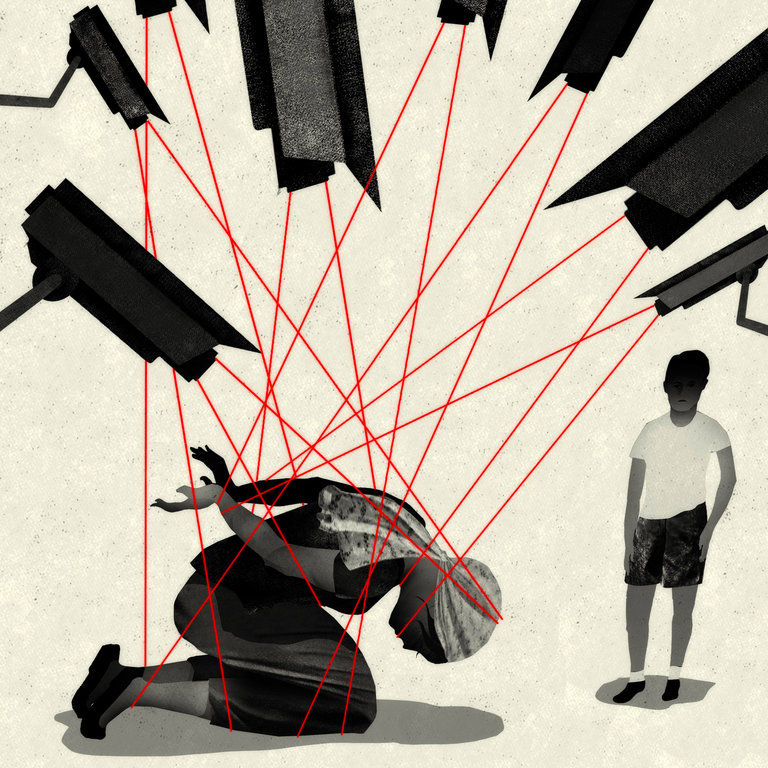 A science-fiction dystopia? No. This is life in northwestern China today if you are Uighur.

China may no longer be the bleak land of Mao suits, self-criticism sessions and loudspeakers blaring communist slogans. It boasts gleaming bullet trains, luxury malls and cellphone-facilitated consumer life. But when it comes to indigenous Uighurs in the vast western region of Xinjiang, the Chinese Communist Party (C.C.P.) has updated its old totalitarian methods with cutting-edge technology.

The party considers Uighurs, the Turkic-speaking ethnic group native to the nominally autonomous region of Xinjiang, to be dangerous separatists. The Qing Empire conquered Xinjiang in the 18th century. The territory then slipped from Beijing’s control, until the Communists reoccupied it with Soviet help in 1949. Today, several Central Asian peoples, including Uighurs, Kazakhs and Kyrghyz, make up about half of the region’s population; the remainder are Han and Hui, who arrived from eastern China starting in the mid-20th century.

Over the past several years, small numbers of Uighurs have violently challenged the authorities, notably during riots in 2009, or committed terrorist acts. But the C.C.P. has since subjected the entire Uighur population of some 11 million to arbitrary arrest, draconian surveillance or systemic discrimination. Uighurs are culturally Muslim, and the government often cites the threat of foreign Islamist ideology to justify its security policies.

I have researched Xinjiang for three decades. Ethnic tensions have been common during all those years, and soon after 9/11, Chinese authorities started invoking the specter of “the three evil forces of separatism, extremism and terrorism” as a pretense to crack down on Uighurs. But state repression in Xinjiang has never been as severe as it has become since early 2017, when Chen Quanguo, the C.C.P.’s new leader in the region, began an intensive securitization program.

Mr. Chen has brought to Xinjiang the grid system of checkpoints, police stations, armored vehicles and constant patrols that he perfected while in his previous post in Tibet. The C.C.P. credits him with having quieted there a restive ethnic group unhappy with its rule. In his first year governing Xinjiang, Mr. Chen has already recruited tens of thousands of new security personnel.

As multiple news outlets have reported, he has also deployed high-tech tools in the service of creating a better police state. Uighurs’ DNA is collected during state-run medical checkups. Local authorities now install a GPS tracking system in all vehicles. Government spy apps must be loaded on mobile phones. All communication software is banned except WeChat, which grants the police access to users’ calls, texts and other shared content. When Uighurs buy a kitchen knife, their ID data is etched on the blade as a QR code.

This digitized surveillance is a modern take on conventional controls reminiscent of the Cultural Revolution in the 1960s and ’70s. Some Uighurs report getting a knock on their door from security agents soon after receiving a call from overseas. Last autumn one Uighur told me that following several such intimidating visits over the summer, his elderly parents had texted him, “The phone screen is bad for our old eyes, so we’re not using it anymore.” He had not heard from them since.

Xinjiang authorities have recently enforced a spate of regulations against Uighur customs, including some that confound common sense. A law now bans face coverings — but also “abnormal” beards. A Uighur village party chief was demoted for not smoking, on grounds that this failing displayed an insufficient “commitment to secularization.” Officials in the city of Kashgar, in southwest Xinjiang, recently jailed several prominent Uighur businessmen for not praying enough at a funeral — a sign of “extremism,” they claimed.

Any such violation, or simply being a Uighur artist or wealthy businessman, can lead to indefinite detention in what the government euphemistically calls “political training centers” — a revival of punitive Maoist re-education camps — secured by high walls, razor wire, floodlights and guard towers. A revered Uighur Islamic scholar is said to have died in one of those centers this week.

According to Radio Free Asia, a county official and a police officer in southern Xinjiang were instructed by superiors to lock up 40 percent of the local Uighur population. Adrian Zenz, a researcher at the European School of Culture and Theology, estimates that 5 percent of the Uighur population across Xinjiang has been or is currently detained — more than 500,000 people in all. Local orphanages overflow with the children of detainees; some children reportedly are sent to facilities in the eastern parts of China.

Why are so many Uighurs subjected to these harsh policies? A Chinese official in Kashgar explained: “You can’t uproot all the weeds hidden among the crops in the field one by one — you need to spray chemicals to kill them all.” The C.C.P., once quite liberal in its approach to diversity, seems to be redefining Chinese identity in the image of the majority Han — its version, perhaps, of the nativism that appears to be sweeping other parts of the world. With ethnic difference itself now defined as a threat to the Chinese state, local leaders like Mr. Chen feel empowered to target Uighurs and their culture wholesale.

Some people in the Chinese bureaucracy and Chinese academic circles disagree with this approach. They worry that locking down an entire province and persecuting an entire ethnic group will only instill long-lasting resentment among Uighurs. Or they note that Mr. Chen’s policies are so burdensome and so costly that they will be difficult to sustain: Han Chinese residents of Xinjiang also complain about the inconvenience and cost of living in such a police state.

Then there are the international repercussions. Blanket repression in Xinjiang can only hurt China’s bid for the world’s respect, just when the Trump administration’s chaotic foreign policy offers Beijing an opportunity to enhance its own standing. Forget the image of President Xi Jinping as a responsible internationalist at Davos. Nothing shreds soft power abroad like coils of razor wire at home.

There’s an old Chinese joke about Uighurs being the Silk Road’s consummate entrepreneurs: When the first Chinese astronaut steps off his spaceship onto the moon, he will find a Uighur already there selling lamb kebabs. And so even as Mr. Chen cracks down in Xinjiang, the Chinese government touts the region as the gateway for its much-vaunted “one belt, one road” initiative, Mr. Xi’s signature foreign policy project. The grand idea combines a plan to spend billions of dollars in development loans and transport investment across Eurasia with a strategic bid to establish China’s diplomatic primacy in Asia.

But while Mr. Xi’s government promises the world a new Silk Road through Muslim Central Asia and the Middle East, the Xinjiang authorities attempt to contain a purported “Uighur problem” by incarcerating many good citizens and spying from every street corner and mobile phone. The C.C.P.’s domestic policies contradict its international aspirations.

How does the party think that directives banning fasting during Ramadan in Xinjiang, requiring Uighur shops to sell alcohol and prohibiting Muslim parents from giving their children Islamic names will go over with governments and peoples from Pakistan to Turkey? The Chinese government may be calculating that money can buy these states’ quiet acceptance. But the thousands of Uighur refugees in Turkey and Syriaalready complicate China’s diplomacy.

Tibetans know well this hard face of China. Hong Kongers must wonder: If Uighur culture is criminalized and Xinjiang’s supposed autonomy is a sham, what will happen to their own vibrant Cantonese culture and their city’s shaky “one country, two systems” arrangement with Beijing? What might Taiwan’s reunification with a securitized mainland look like? Will the big-data police state engulf the rest of China? The rest of the world?

As China’s profile grows on the international stage, everyone would do well to ask if what happens in Xinjiang will stay in Xinjiang.