An ethnic minority Muslim Uyghur farmer serving a 10-year sentence for “illegal religious activities” has died in jail in western China’s Xinjiang region amid concerns of torture, his brother said.

Yakob Idris, who died on Sept. 23, had been in good health when he was sentenced in May at a mass trial held at a sports field in Ghulja city [Yining in Chinese] of Kepekyuzi town in western China’s Xinjiang Uyghur Autonomous Region (XUAR). 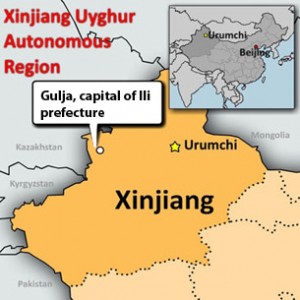 But authorities transferred Idris, who was aged 56, to several prisons in Urumqi, the capital of Xinjiang, where he eventually died at the No. 4 jail, his younger brother Sadik Idris, told RFA’s Uyghur Service.

“We were told that he had fallen ill inside the jail, and we were asked to come,” Sadik Idris said.

“We met him [Yakob] and gave him some medication. They [prison authorities] did not allow us to have him treated outside the jail. He was treated in the prison clinic. Apparently, he could not get better. We brought all the medications that the prison clinic asked us to bring.”

“We did not ask for an autopsy report,” he said. “They said that he had so many illnesses. When we arrived there, he was already dead.”

Sadik Idris said prison authorities refused to turn over his brother’s body to relatives, arguing that he had not completed his full sentence.

“They said they had a regulation that since he died before completing his sentence, we were not allowed to take his body home,” Sadik Idris said. “We were asked to bury him in Urumqi, so we did.”

“We are illiterate peasants, so we did not know the law, and the political situation is not in our favor, so we obeyed,” he said, referring to China’s policy of keeping a tight rein on the millions of Turkic-speaking mostly Muslim Uyghurs who call Xinjiang their home.

Xinjiang has seen an upsurge in violence that has left hundreds dead, and which China has blamed on terrorists and Islamist insurgents seeking to establish an independent state.

But rights groups accuse Chinese authorities of heavy-handed rule in Xinjiang, including violent police raids on Uyghur households, restrictions on Islamic practices, and curbs on the culture and language of the Uyghur people.

When family members last saw Yakob Idris in August, they knew he was living the last months of his life, his brother said. At the time, prison authorities told them that he had one to two months to live.

“We were so angry and asked them why they were telling us now and not before,” he said. “They said they were doing their best to treat him.”

Yakob Idris, who was born in Ghulja, was also a contractor.

Authorities had detained him in 1997 for alleged participation in February protests in Ghulja, which erupted after word spread that Chinese authorities had executed 30 Uyghur independence activists and banned the local meshrep, a fraternal organization for Uyghur men, fearing it would be used as a cell for Muslim independence organizations.

On Feb. 5 of that year, Chinese security forces fired on the protestors, killing nine, according to official reports, although some dissidents estimated the number killed to be at least 100.

The dissidents claimed that authorities arrested up to 1,600, of whom about 190 were executed, according to a report by Amnesty International at the time. Yakob Idris received an eight-year sentence.

After his release from prison in 2005, he was detained in 2011 and 2013 for “illegal preaching” and charged with “practicing illegal religious activity” and being “a religious extremist,” although his brother said he was not radical at all.

Many Uyghurs claim to have long suffered from ethnic discrimination, oppressive religious controls, and continued poverty and joblessness, saying the influx of majority Han Chinese in their region threatens their culture and livelihood.

In 2009, almost 200 people died in bloody riots between Uyghurs and Han Chinese in Urumqi.
www.rfa.org