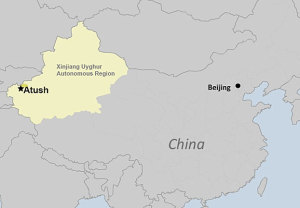 Abdurishit Haji, 55, was taken into custody on Dec. 16, 2016, and died on Jan. 13, with his body returned to his family that same day, his son Hesenjan Abdurishit told RFA’s Uyghur Service.

“I don’t know if my father had any health issues. We were not aware of any,” the younger man said, adding, “They said our father was accused of helping 81 Uyghurs get visas to travel to Syria.”

Abdurishit Haji had worked in Kyrgyzstan about five years before, and had gone to Turkey two years ago to seek repayment of a loan, his son said.

He had been living in Atush city in Xinjiang’s Kizilsu Kirghiz Autonomous Prefecture for the last year, he said.

“Maybe he helped some Uyghurs get Turkish visas while he was in Kyrgyzstan, and some may have then left for Syria after going to Turkey,” he said. “That is probably why my father was arrested. But we never asked the reason, since it would be pointless to do so.”

Abdurishit Haji had been accused by Chinese police of recruiting and fundraising for Uyghur separatist organizations while traveling on business in Kyrygyzstan and Turkey, Litip Imin—Communist Party secretary for Atush city’s Azak village—told RFA’s Uyghur Service.

“He used to conduct a business in fabrics in Kyrgyzstan, but I don’t know what kind of business he did in Turkey,” he said.

“I was the first person who was informed about Abdurishit Haji’s death,” said Litip, who was told by authorities to accompany Abdurishit’s family to the Ulugqat county hospital to take charge of the body.

“They said he had died of heart failure during interrogation,” he said, adding, “His relatives just sat there, hanging their heads. They looked absolutely terrified.”

“We were not allowed to take his body home, but had to bury him that same day under police supervision.”

Friends and other community members came to the family home next day to express their condolences, but the house had been put under police watch, Litip said.

“At least 28 people were detained and questioned. Some were later released, but the rest are still under investigation.”

China has vowed to crack down on ethnic separatism in Xinjiang, the homeland of the Uyghur people, and regularly conducts “strike hard” campaigns including police raids on Uyghur households, restrictions on Islamic practices, and curbs on Uyghur language and culture.

While China blames Uyghur extremists for terrorist attacks, experts outside China say Beijing has exaggerated the threat from the Uyghurs and that repressive domestic policies are responsible for an upsurge in violence there that has left hundreds dead since 2009.