BEIJING (Reuters) – Explosives hurled from two vehicles which ploughed into an open market in China’s troubled Xinjiang region killed 31 people on Thursday, state media reported, the deadliest act of violence in the region in years. 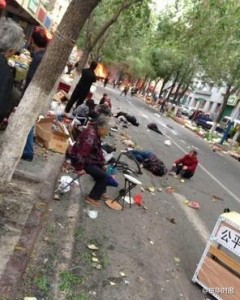 China called the attack in the regional capital of Urumqi a “serious violent terrorist incident” and domestic security chief Meng Jianzhu vowed to strengthen a crackdown on the “arrogance of terrorists”. Ninety-four people were wounded.

China has blamed a series of knife and bomb attacks in recent months on separatist militants from Xinjiang, the traditional home of the ethnic Muslim Uighurs.

The cross-country vehicles rammed into shoppers in an open market, Xinhua news agency reported, citing witness reports. Explosives were flung out of the windows, and one of the vehicles exploded.

One witness told Reuters he saw the aftermath of the blasts on his way to work. “The air was full of the smell of gunpowder and the sound of sobbing,” he said. “There were simply too many (casualties), old folks who were at the morning market.”

A business owner told Xinhua he had heard a dozen loud explosions at the market near Renmin Park in downtown Urumqi. 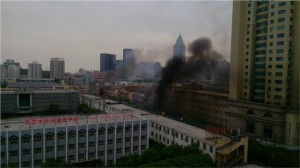 Xinjiang has been plagued by violence for years, but rights activists and exile groups say the government’s own heavy handed policies in the region have sowed the seeds of unrest.

Photos posted on social media purportedly of the blast, but not verified by Reuters, showed a column of smoke and chaos at the market, with bloodied people lying on the tree-lined road near small stands selling fruit, vegetables and eggs.

“There were two vehicles that drove like crazy towards the morning market,” another witness who declined to give his name told Reuters by telephone. “The market was total chaos. Hawkers and shoppers started running everywhere… it was definitely a terrorist act. I’m so angry.”

Other photos showed riot police on the scene and bodies lying amid flames. Produce and debris were scattered across the street. 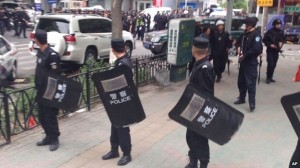 Dilxat Raxit, spokesman for the exiled World Uyghur Congress, said in an e-mail to Reuters that while he wasn’t sure who committed the attack, he believed Beijing’s policies in the region should be examined.

“The volatility of the situation and Beijing’s repressive policies in the area have a direct relationship to this,” Raxit said. “I urge Beijing not to use this incident as an excuse to expand repressive policies, and instead to adjust policies to ameliorate a deteriorating situation.” 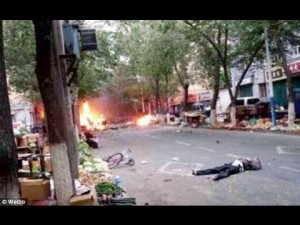 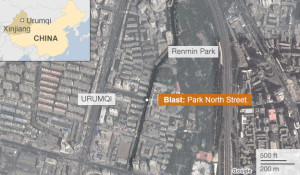 The Xinjiang government could not be immediately reached for comment, but China’s Foreign Ministry spokesman Hong Lei said the attack “should be condemned jointly by the Chinese people and the international community”.
“The Chinese government has the confidence and the ability to combat the terrorists,” Hong said at a daily news briefing. “These terrorists are swollen with arrogance. Their schemes will not succeed.”

In a posting on its Chinese-language microblog account, the U.S. Embassy said it offered condolences to victims of the “violent attack”, but stopped short of labeling it terrorism.

In contrast, Russian President Vladimir Putin expressed condolences over what he called the “terrorist act” in Urumqi in a telegram to Chinese President Xi Jinping on Thursday, the Kremlin said, a day after a visit to Shanghai that produced a landmark agreement on supplies of Russian natural gas to China.

The attack was the deadliest in a recent series targeting crowded public places in China. In March, 29 people were stabbed to death at a train station in the southwestern city of Kunming.

A bomb and knife attack earlier this month at an Urumqi train station killed one bystander and wounded 79. A car burst into flames at the edge of Beijing’s Tiananmen Square in October, killing five people.

China has said Islamist militants from Xinjiang carried out the attacks. Separatist groups in Xinjiang are seeking to form their own state called East Turkestan.

Xinjiang, resource-rich and strategically located on the borders of central Asia, is home to the Uighur people, who speak a Turkic language and are culturally distinct from China’s ethnic Han majority.

Violent riots shook the region in 2009, when hundreds of locals took to the streets in Urumqi, burning and smashing vehicles. Dozens were killed in the unrest.

In recent weeks, China has intensified a crackdown on Uighurs in the region, jailing dozens for spreading extremist propaganda and manufacturing arms, among other charges.

Christopher Johnson, a former China analyst at the CIA, said China’s leadership may eventually realize that a policy of constantly tightening controls on Xinjiang may not be effective in preventing attacks.

“I’m kind of doubtful that they are going to announce some sort of more liberal policy,” said Johnson, who now works at the Center for Strategic and International Studies in Washington.

“But sooner or later I think they are going to have to come to that reality because the evidence is just smacking them in the face.”
www.newsweek.com