The red carpet Britain is laying out this week to welcome Chinese President Xi Jinping is stained with the blood of Uighurs, Tibetans and dissidents, a top exiled Uighur leader said on Monday, calling the lavish reception “unfortunate”.

Britain has been criticized by activists for putting human rights on the backburner when it comes to forging ties with China, though British officials say they do bring up the subject but in private as it is a better way to effect change.

China says Islamist militants and separatists operate in energy-rich Xinjiang, on the borders of central Asia, where hundreds have died in violence in recent years.

But exiles and rights groups say China has never presented convincing evidence of the existence of a cohesive militant group, and that much of the unrest can be traced back to frustration at controls over the culture and religion of the Uighur people. Beijing strongly denies such charges.

“It is very unfortunate that they are welcoming President Xi by the red carpet,” Rebiya Kadeer, president of the World Uyghur Congress, told reporters while on a visit to Tokyo, when asked about Xi’s trip to Britain.

“They should know that in that red carpet is the blood of the Uighur people, Tibet and other Chinese dissidents,” she added, speaking in Uighur through a translator. 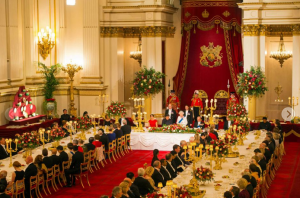 Britain is pulling out all the stops to welcome Xi, and he and his wife will stay with the Queen in Buckingham Palace.

“There are military vehicles, Chinese soldiers patrolling every street of the Uighur neighborhoods, police everywhere,” she added. “This situation created a terrible tension between the government and the Uighur people.”

China dismisses Kadeer as an “anti-Chinese splittist”. She is a former Chinese political prisoner accused of leaking state secrets in 1999. She was later allowed to leave on medical grounds and now lives in the United States.

Kadeer said the World Uyghur Congress condemned all forms of violence and called on China to change its ways.

China says some Uighurs have traveled to Syria and Iraq to fight with Islamic State and other groups.