A series of deadly attacks, allegedly carried out by Uighur extremists, has set China on edge and given an ancient Uighur craft an ominous taint

In Yengisar, on the fertile edge of the Taklimakan Desert, people have long believed that placing a knife on their bedside keeps away bad dreams. On a baby’s seventh day of life, it is tradition for parents to briefly slip a blade under the sleeping infant’s head to guarantee a long and healthy life.
By dusty roadsides, farmers with long white beards unsheathe their blades to slice open juicy green melons, selling sweet wedges for 15 cents (55 fils). In open-air markets, butchers slaughter sheep, cattle and even camels in accordance with Muslim practice, skinning the hides and then swinging cleavers to parcel the carcasses into cuts of meat.
For the ethnic Uighurs who dominate this rural region in far western China, perhaps nothing is more essential — as tool and talisman — than a knife.
Over the centuries, Uighur craftsmen have elevated knife-making to a high art, fashioning small folding qelemturachs and larger pichaqs one by one in scores of small factories and workshops across Xinjiang province. 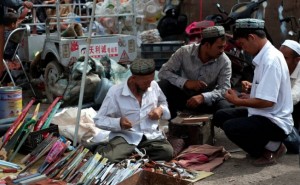 The most expensive and ornate boast silver blades and handles criss-crossed with intricate inlays of iridescent shell, stone, bone and other materials, often in geometric patterns with diamond, circle or even heart motifs. The craftsman’s name and hometown are typically inscribed on the blade, in flowing Uighur script and sometimes Chinese characters as well.
But after a string of deadly clashes and terrorist attacks, including a mass slashing, that Chinese authorities blamed on Uighur separatists and religious extremists, the handcrafted knives have taken on a deadly cast.
The violence has set back the once-thriving tourist trade to the south of Xinjiang province, and remaining visitors may think twice about the symbolism of giving anyone a Uighur knife as a gift these days. For the few sightseers who still want them, confusion over restrictions on mailing knives or even taking them in checked-in airline baggage has further damped the trade.
On a recent weekday, the region’s knife-making capital, Yengisar, resembled nothing so much as a ghost town. Blade-shaped signs 9 metres tall stood forlornly above ample parking lots designed for tour buses, and colourful flags flapped in the wind, beckoning customers.
Not only were there no shoppers, but no shops were open. The local workshops were also closed.
Finally, a policeman happened by and told the neighbourhood mini-mart clerk he wanted to buy an animal-bone comb from the knife shop next door. The clerk called the owner, who hustled over to throw up his metal security door and make whatever sale he could.
“Business is bad this year; there are no tourists,” the salesman said as the officer picked out his comb and a few other shoppers wandered in, browsing the display cases stuffed with knives for every budget, from $5 pocket knives 5 centimetres long to kitchen cleavers and decorative silver blades with deer-horn handles.
Exactly why the entire strip of dozens of shops and small factories was shut down was unclear. One local said the craftsmen had simply gone off for ten days to pick cotton in fields nearby; September is peak harvest season.
But people here are skittish, and no one wants to share their names with a journalist. Another shop owner said proprietors had been ordered to close for a week — by whom he didn’t specify — because the provincial capital, Urumqi, 1,130 kilometres to the northeast, was hosting a high-profile international trade expo that week.
Though the notion that authorities might extend security precautions such a distance may sound far-fetched, China has strict rules on weaponry. Firearms are tightly controlled and hard to obtain; all but the smallest knives are supposed to be registered with police upon purchase.

China has periodically clamped down on knife sales around major national events. Ahead of the November 2012 ceremony at which Xi Jinping was elevated to the Communist Party’s top post, for example, supermarkets across Beijing were ordered to stop sales of even small paring knives.
Since then, a series of deadly attacks has set the nation on edge and given Uighur knives an ominous taint, though it is unclear in many cases whether the assailants used Uighur knives or mass-produced ones.
In March, black-clad assailants went on a rampage in front of a train station in the Yunnan province town of Kunming, using large knives to hack 29 people to death and injuring more than 140. In July, the imam of the main mosque in southern Xinjiang’s largest city, Kashgar, was stabbed to death just outside the holy site in broad daylight.
Authorities said the assailants of the imam, who had strong ties to the Communist Party, were Uighur men in their late teens and early 20s who were influenced by “extremist” videos and teachings at unauthorised mosques.
The March attack prompted authorities to introduce tighter security measures nationwide. Cops who previously patrolled without guns have been given firearms. Airport security screeners in Xinjiang now wave their wands even under the soles of passengers’ bare feet. New heavy traffic dividers have been installed in Beijing’s Tiananmen Square. Checkpoints are common in southern Xinjiang, and in some areas of the province, the internet and text-messaging services have been disabled.
An expatriate who recently tried to buy a knife at two supermarkets in Beijing was told by clerks that they no longer stocked them. Eventually, the foreigner found a small selection at a speciality kitchen shop, though concealed behind the counter.
The Uighur craft of knife-making is often passed from father to son. Down the road from Yengisar, at a rest stop baking in the sun, one small knife stand was open, and outside, the owner’s wife watched their toddler run around, naked except for a T-shirt.
A drill, grinding equipment and other tools sat in a heap at the front door of the shop. No customers were browsing the exquisite wares, ranging from plain $10 cleavers to a $500 silver blade with a decorative inlaid handle that takes one craftsman 15 days to produce.
Asked whether he planned to pass the trade on to his boy, the young owner just sighed and said, “I have no idea.”
A few days later, back in Yengisar, some knife shops had reopened. One proprietor got lucky when a group of Russian motorcyclists and a busload of tourists who had driven all the way from Shanghai on China’s eastern coast rolled up. Transporting knives back home would be no problem for them.
“I didn’t know anything about these knives until our guide told us,” said Gennady Kopylov, 37, of Moscow, who bought a large kitchen knife for about $50. “I guess some Chinese might be scared now, you know, the Muslim thing, but these knives are great. And it’s no problem to take them back on the bike.”
–Los Angeles Times