The Xinjiang autonomous region in China’s far west has had a long history of discord between the authorities and the indigenous ethnic Uighur population. The BBC sets out why.

Who lives in Xinjiang?

Most Uighurs are Muslim and Islam is an important part of their life and identity. Their language is related to Turkish, and they regard themselves as culturally and ethnically close to Central Asian nations.

The region’s economy has largely revolved around agriculture and trade, with towns such as Kashgar thriving as hubs along the famous Silk Road.
But development has brought new residents. In the 2000 census, Han Chinese made up 40% of the population, as well as large numbers of troops stationed in the region and unknown numbers of unregistered migrants.

Has Xinjiang always been part of China?

The region has had intermittent autonomy and occasional independence, but what is now known as Xinjiang came under Chinese rule in the 18th Century.

An East Turkestan state was briefly declared in 1949, but independence was short-lived – later that year Xinjiang officially became part of Communist China.

In the 1990s, open support for separatist groups increased after the collapse of the Soviet Union and the emergence of independent Muslim states in Central Asia.

What is at the heart of the unrest?

While the situation is complex, many say that ethnic tensions caused by economic and cultural factors are the root cause of the recent violence..

The Han Chinese are said to be given the best jobs and the majority do well economically, something that has fuelled resentment among Uighurs. 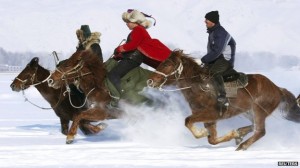 Activists say Uighur commercial and cultural activities have been gradually curtailed by the Chinese state. There are complaints of severe restrictions on Islam, with fewer mosques and strict control over religious schools.

Rights group Amnesty International, in a report published in 2013, said authorities criminalised “what they labelled ‘illegal religious’ and ‘separatist’ activities” and clamped down on “peaceful expressions of cultural identity”.

The Uighur culture leans more towards Central Asia than China

In July 2014, some Xinjiang government departments banned Muslim civil servants from fasting during the holy month of Ramadan. It was not the first time China had restricted fasting in Xinjiang, but it followed a slew of attacks on the public attributed to Uighur extremists, prompting concerns the ban would increase tensions.

Making sense of the unrest from China’s Xinjiang

Death on the Silk Route: Violence in Xinjiang

How has the violence developed? 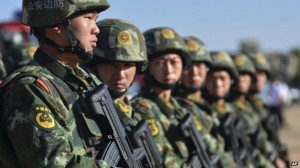 China has poured troops into the region in recent years as unrest has rumbled
China has been accused of intensifying its crackdown on the Uighurs after street protests in the 1990s and again in the run-up to the Beijing Olympics in 2008.

But things really escalated in 2009, with large-scale ethnic rioting in the regional capital, Urumqi. Some 200 people were killed in the unrest, most of them Han Chinese, according to officials.

Xinjiang’s economy has largely revolved around agriculture and trade
Security was increased and many Uighurs detained as suspects. But violence rumbled on as right groups increasingly pointed to tight control by Beijing.

In June 2012, six Uighurs reportedly tried to hijack a plane from Hotan to Urumqi before they were overpowered by passengers and crew.

There was bloodshed in April 2013 and in June that year, 27 people died in Shanshan county after police opened fire on what state media described as a mob armed with knives attacking local government buildings

Establishing facts about these incidents is difficult, because foreign journalists’ access to the region is tightly controlled, but in recent months, there appears to have been a shift towards larger-scale incidents where citizens have become the target, particularly in Xinjiang.

At least 31 people were killed and more than 90 suffered injuries in May 2014 when two cars crashed through an Urumqi market and explosives were tossed into the crowd. China called it a “violent terrorist incident”.

It followed a bomb and knife attack at Urumqi’s south railway station in April, which killed three and injured 79 others.

In September about 50 died in blasts in Luntai county outside police stations, a market and a shop. Details of both incidents are unclear and activists have contested some accounts of incidents in state media. 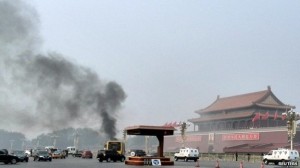 Chinese officials blamed the attack at Tiananmen Square on separatists from Xinjiang
Some violence has also spilled out of Xinjiang. A March stabbing spree in Kunming in Yunnan province that killed 29 people was blamed on Xinjiang separatists, as was an October 2013 incident where a car ploughed into a crowd and burst into flames in Beijing’s Tiananmen Square.

In response to the latest slew of attacks, the authorities have launched what they call a “year-long campaign against terrorism”, stepping up security in Xinjiang and conducting more military drills in the region.

There have also been reports of mass sentencings and arrests of several “terror groups”. Chinese state media have reported long lists of people convicted of extremist activity and in some cases, death sentences.

Shock and anger after Kunming brutality

China also blamed Xinjiang separatists for the brutal attack in March 2014 at Kunming station
China has often blamed ETIM – the East Turkestan Islamic Movement – or people inspired by ETIM for violent incidents both in Xinjiang and beyond the region’s borders.

ETIM is said to want to establish an independent East Turkestan in China. The US State Department in 2006 said ETIM is “the most militant of the ethnic Uighur separatist groups”.

The scope of ETIM’s activities remains unclear with some questioning the group’s capacity to organise serious acts of extremism.

ETIM has not said it was behind any of the attacks. Chinese authorities said the Turkestan Islamic Party – which it says is synonymous with ETIM – released a video backing the Kunming attack, however.

With the recent apparent escalation in Xinjiang-related violence, the question of who and what is driving it is likely to attract greater scrutiny.
Q&A: East Turkestan Islamic Movement