Pope Francis has met with the pro-abortion president of Argentina, Alberto Fernandéz. He met with Fernandéz’ mistress, too. Francis has met with contraceptive impresario Bono, with Obama, the tormentor of the Little Sisters of the Poor, and with hard-left activist Angelina Jolie. He’s met with George Clooney, Mark Zuckerberg, and Tim Cook. He even traveled to Havana to meet with the murderous communist dictator Fidel Castro, who spent half a century slaughtering Catholics in Cuba.

The Merciful One invited another murderous communist dictator, Chinese president and enthusiastic population-culler (usually by means of forced sterilization or forced late-term abortion) Xi Jinping, to the Vatican, but Xi had other chumps to hoodwink and so didn’t have time.

Undeterred, Francis has converted the Vatican into Bilderberg II, Davos South, and has put the full faith and credit of the papacy behind globalist powerhouses like George Soros and Jeffrey Sachs. Francis has even carved out space in his schedule to meet with pagan goddesses, for example raising the Amazonian she-devil Pachamama to the altars around this time last year.

But there is one person with whom Francis absolutely will not schmooze: US Secretary of State Mike Pompeo. Pompeo, a pro-life Christian, is in Rome now, but Francis has publicly refused to meet with him. 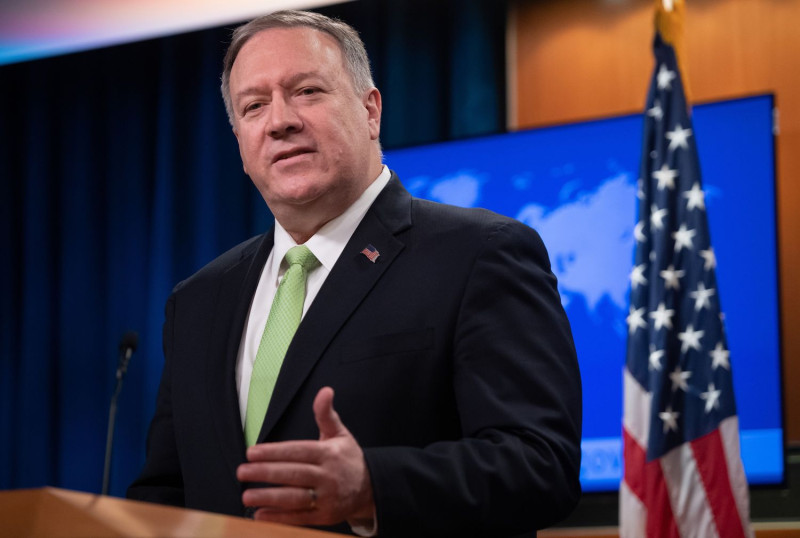 Why? Because Pompeo criticized Francis’ deal with Beijing, the deal essentially capitulating to the Chinese Communist Party and entrusting the Politburo with the Chinese Church. Francis signed off on the persecution of Catholics, a high-minded American government official called him on it, and Francis chose to sulk in his tent like Achilles rather than grant an audience with one of the most powerful pro-lifers on the planet.

If you are confused by all this, you shouldn’t be. Once it is admitted that Jorge Maria Bergoglio seems to believe he is not a pope but a politician, then it all becomes clear. Francis likes leftists (and atheists). He won’t meet with anyone else. Make sense now?

It is time to recognize reality and adjust policy accordingly. Newchurch, the faux Catholic Church headed by Pope Francis, is not a religious organization at all. It is a globalist Super-PAC and a front operation for the PRC. As such, everyone in the United States affiliated with Newchurch—every priest, every bishop, every “charity,” every hippie nun—must register as a foreign agent. And the entire edifice of Newchurch, all the land and the trusts and the cash holdings for paying off people sexually abused by Newchurch lechers, must be taxed at the standard corporate rate.

Jorge Maria Bergoglio is a political operative, his Vatican is Party Central, and his agents are working ultimately for Xi Jinping, not for the Galilean as of old. Tax Newchurch and expose it for the front organization it has become. Pay down the national debt, Henry VIII style, by running the corrupt Newchurchmen out of their sinecures and opening their dealings with China to the scrutiny of the FBI.

The Newchurch corporate structure has been largely updated recently anyway. As the sex scandals caused by Newchurch deviants have led to hundreds of millions of dollars in payouts to the abused, many Newchurch dioceses have actually reorganized their property, with the help of high-powered attorneys, in order to prevent victims from claiming Newchurch assets. Many dioceses appear, in fact, to have undervalued their holdings dramatically as a way to keep money in the exorbitant tax shelter known as Newchurch.

This must end. State regulations and IRS rules provide tax exemptions for places of religious worship, but Newchurch fails that test. Pope Francis, for his part, is arguably an atheist. At any rate, Newchurch’s protestations of religiosity are obviated by their highly political and even treasonous activities, and also by the obstruction of justice in hiding assets from abuse victims. To complete the seamless garment, it is necessary to tax Newchurch and thereby bring it fully within the embrace of civil society.

Of course, any bishop or parish who or which formally severs all connections with Newchurch should be allowed the full exemptions which other religious groups enjoy. Any priest who renounces Newchurch is a man of God, not of the PRC, and he should be encouraged to perform his clerical duties and minister to his flock. Any parishioner who transfers to an SSPX parish should continue unmolested (and here we must admit to a double entendre, cruelly necessitated by the horrors of Newchurch) as before.

Cut ties with Newchurch, in other words, and you are a real church again.

But all who remain in the globalist, communist, Chinese-front organization of Newchurch under Pope Francis must register as a foreign agent (not of Rome, but of Beijing) and pay the full brace of property, sales, corporate, and capital gains taxes required by state and federal law.

And, as a related policy update, the State Department, having business with the Vatican, should direct all communications through the Vatican desk at the local PRC consulate. One more seamless garment tidied up.