In a parting shot as he prepares to leave office, Secretary of State Mike Pompeo accused China of a state-sanctioned “genocide” of its Uighur population in the Xinjiang province.

“We are witnessing the systematic attempt to destroy Uighurs by the Chinese party-state,” Pompeo wrote in a statement Tuesday.

The U.S. is now the first state to accuse China of genocide. Such a determination is rare and could prompt the Biden administration to impose even more sanctions on the U.S. rival. Then-Biden campaign spokesperson Andrew Bates said last year that the Chinese Communist Party’s policies amounted to a “genocide.”

After the U.S. announcement, other nations could be prompted to make a similar determination.

“What took so long is when you do something like this, you have to be right,” Pompeo said of the timing on Fox News’ “America Reports” Tuesday. “Indeed, leaders all across the world I think will recognize the United States got this right.”

Pompeo made the determination as President-elect Biden’s administration is set to take office in less than 24 hours, and hearings for Biden’s nominee to succeed Pompeo, Antony Blinken, began Tuesday afternoon.

The secretary detailed: “These crimes are ongoing and include: the arbitrary imprisonment or other severe deprivation of physical liberty of more than one million civilians, forced sterilization, torture of a large number of those arbitrarily detained, forced labor, and the imposition of draconian restrictions on freedom of religion or belief, freedom of expression, and freedom of movement.” He added that in addition to forced sterilization and forced abortions, the CCP had coerced Uighur women into marrying non-Uighurs and separated Uighur children from their families.

Pompeo said the Trump administration had for the past four years been working to expose the Chinese Communist Party as “a Marxist-Leninist regime that exerts power over the long-suffering Chinese people through brainwashing and brute force.”

Last week, the administration announced it would halt imports of cotton and tomatoes from the Xinjiang province. U.S. Customs and Border Patrol officials said they would block any imports suspected of being tied to forced labor.

Since last year, the Trump administration has steadily ramped up pressure on Beijing, imposing sanctions on officials and companies for activities and Taiwan, Tibet, and the South China Sea. Such penalties have been ramped up as the White House has blamed China for covering up information about Covid-19.

Many of those who have taken part in the repression of Xinjiang are already under sanction.

China has imprisoned over one million people, mostly Uighur and other majority-Muslim minorities, in a network of concentration camps, U.S. officials and human rights groups say.

China says its policies are only to promote development in the region. 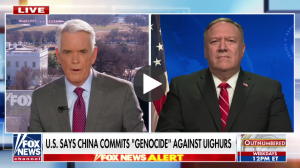