In a letter of December 10, 29 MPs and one member of the European Parliament from Lithuania write to the Chinese President denouncing the repression of all religions

MEMBERS OF THE PARLIAMENT OF THE REPUBLIC OF LITHUANIA APPEAL

To the President of the People’s Republic of China H.E. Xi Jinping

We, the undersigned Members of the Parliament of the Republic of Lithuania and of the European Parliament,
– profoundly worried by the violent “sinicization” of religions conducted by the Chinese Communist Party, insofar as it places Communist ideology and obedience to the Communist state above the imperatives of faith and conscience and thus violates the autonomy of religious faith, as well as the freedom of religion and conscience, one of the fundamental human rights;
– outraged by the persecution of the Uyghur Muslims which is tantamount to genocide and which is pursued by the People’s Republic of China officials in the East Turkestan (Xinjiang Uyhgur Autonomous Region), whereby they prevent Uyghurs from confessing their faith and cherishing their national identity, have incarcerated more than one million Uyghurs in prison camps, have installed the system of total surveillance, and perform other kinds of violence against the representatives of the Uyghur nation;
– protesting against the continuing oppression of the Tibetans and against the deliberate colonization, insofar as these violate human rights and seek to obliterate the traditional faith, way of life, and national identity of Tibet;
– condemning the persecution, incarceration, torture and barbarous killing for the sake of organ harvesting of the adherents of Falun Gong, the persecution, incarceration, as well as prohibition and hindering of religious practices, even those privately performed, of the adherents of The Church of Almighty God, the Catholic Church, as well as other religions;
– extremely concerned over the policy of destruction of religious symbols pursued by the authorities of the People’s Republic of China, whereby Christian, Muslim, Buddhist, and other religions’ houses of
prayer are demolished, nationalised, and defaced, public religious symbols are destroyed and concealed, thus also erasing historical cultural monuments, religious literature and religious accessories are confiscated and destroyed, while Communist symbols and images are forcibly introduced into the houses of prayer; appeal to Your Excellency, demanding
– to recognise the fact that the right to freedom of thought, conscience, and religion is a fundamental human right which encompasses the “freedom, either alone or in community with others and in public or
private, to manifest his religion or belief in teaching, practice, worship and observance”, as Article 18 of the Universal Declaration of Human Rights asserts;
– to discontinue forthwith the persecution of religions and their adherents, and to release the prisoners of conscience of all religions;
– to cease the destruction and confiscation of the houses of prayer, religious literature, and other religious accessories;
– to put an end to the persecution of the Uyghur and Tibetan nations and to the attempts to wipe out their ethnic and religious identity, which amount to genocide;
– to liberate more than one million Uyghurs incarcerated in the prison camps in Xinjiang. 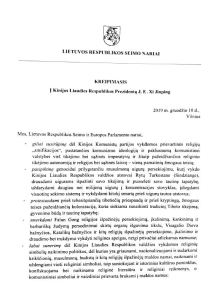