At least a dozen people, including three policemen, were killed and about 100 injured in attacks targeting government buildings and police stations in a southern prefecture of China’s restive Xinjiang region at the weekend, local officials and eyewitnesses said, as details of the violence emerged Thursday. 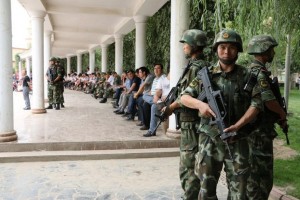 The Xinjiang government’s Tianshan web portal had said on Monday that two people were killed in the Sept. 21 bomb attacks by suspected Uyghurs on at least three locations in Bugur (in Chinese, Luntai) county in the Bayingolin Mongol Autonomous Prefecture.

But local officials and witnesses told RFA’s Uyghur Service that the violence had caused higher casualties.

They said the raids on the Bugur city center and the townships of Yengisar and Terekbazar had left at least 12 people dead, including three policemen and seven attackers.

All of them were killed during the bomb attack at a police station in Yengisar, the sources said. The number of fatalities in Bugur and Terekbazar was not immediately known, they said.

The Bugur county hospital has been crammed with patients with serious injuries, a nurse said, in the latest violence to rock Xinjiang, which has seen more than 200 deaths in attacks the past year.

“I assume there are about 100 people with injuries because all the hospital beds are occupied right now,” the nurse said.

Among those undergoing treatment were up to 20 policemen, as well as one suspected attacker, she said.

The raids were believed to have been staged by disgruntled ethnic minority Uyghurs, who claim to have long suffered ethnic discrimination, oppressive religious controls, and continued poverty and joblessness, sources said.

A curfew has been imposed in the affected areas, with schools and offices closed as of late Tuesday, according to Aklikim, the secretary of the ruling Chinese Communist Party branch in Bartoghraq village in Terekbazar.

“The explosions are all related to attacks on government buildings and police stations,” he said.

Amangul Mollaq, the aunt of policeman Nijat Ehet, who was seriously injured in the raid on the police station in Yengisar, said he had gone to investigate an explosion when he was stabbed by one of the attackers.

“When he heard the explosion, he went to the site and saw the gate of the police station being ripped off by the blast and a group of people attacking the station from the front and back of the building,” she said.

“When my nephew was dispersing the crowd, one of the attackers stabbed him,” Mollaq said. “He was only able to convey a few details as his condition was severe.”

Police officers who visited him at the hospital told Mollaq that “three suspects who staged the attack on the police station from the front and three attackers who came from the back of the building were killed on the spot.”

“I also heard that two policemen with the names Husenjan [Osman] and Ibrahim had been killed in action.”

Another police assistant, who was not identified, was among the three policemen who died in the raid, sources said.

Qadir Osman, a Communist Party cadre in Yengisar and whose brother, a restaurant owner, was among those killed in the attacks, said the township morgue was mobbed by relatives and friends of those who perished.

“The place was surrounded by police and there were about 100 people, some of whom were waiting to identify the bodies,” he said.

Osman, whose younger brother was shot dead, said that among those at the morgue was a Han Chinese woman who told him that her husband was “crushed” by a motor vehicle during the attack.

A teacher in Yengisar, who declined to be identified, said he witnessed police cars, motorcycles, and a gas station being torched.

He said that he believed that the attackers, particularly in Bugur county center, were Uyghurs disgruntled by mass forced evictions to make way for the influx of Han Chinese.
www.rfa.org