A clash in China’s northwestern Xinjiang region killed 17 members of the country’s Uyghur minority, including four policemen who were slashed with knives, nine attackers who were shot to death and four people killed by police gunfire, officials and witnesses said. 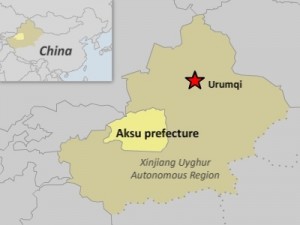 The Feb. 17 incident in Aksu (In Chinese, Akesu) prefecture came during house-to-house searches by police, who were attacked by a group of more than 10 people gathered in a house 150 meters from the police station in the town of Yaqaeriq. (Yingairike) in Bay (Baicheng) county.

“When they entered the house, there were 10 or so people in the house. The chief ordered them to disperse, at this point they rushed all together and snatched the rifle and handgun from Qasim Imir’s hand, then slashed him with the knifes and axes,” Yaqaeriq Deputy Mayor Turdahun Tohti told RFA’s Uyghur service. Qasim Imir was the police chief of the town.

“Because the rest of the police were auxiliary police they did not have guns, so they ran for their lives, and the suspects chased them. When they closed up on them as they approached the police station, the armed police stationed there came out and started shooting,” Tohti added.

The showdown ended with Imir and three auxiliary police dead from knife and axe wounds, nine suspects shot to death by police and four passersby who were hit by police gunfire, he said.

Among the slain passersby were a man named Qul, head of the local hospital, and his daughter who, Tohti said, “ran so they were confused with the suspects and police shot them.”

A Yaqaeriq policeman name Yaqupjan told RFA that “most of the guys who were in the house were family members of those who were arrested and sentenced during last year’s strike hard campaign.”

China has in recent years launched a series of “strike hard” campaigns in Xinjiang in the name of the fight against separatism, religious extremism and terrorism. The targets of these campaigns, the minority Turkic-speaking, Muslim Uyghurs, complain of pervasive ethnic discrimination, religious repression, and cultural suppression by China’s communist government.

“The good thing is that they did not know how to use the guns,” Yaqupjan said of the group of men who snatched firearms away from the police chief.  “If they did, all of us might be dead.”

Two of the assailants, listed on arrest warrants as Azadem Nur and Abliz Abla, escaped with a firearm, the policeman said.

Omer Imin, head of number 3 village in the township, said two of the dead suspects were female and two of the men killed by police were younger brothers of men jailed last year and were closely watched on a list of “focused families.”

Uyghurs say they chafe under strict police scrutiny and controls on their movements and violent clashes with police are not uncommon.

“The strike hard policy exceeds the prescribed limits,” said a worker in Bay county, who spoke on condition of anonymity.

“For example a farmer who helped tend his jailed friend’s corn field was sentenced to three years as a ‘terrorist.’ He does not even know why he was sentenced,” the worker told RFA.

“Right now everybody is living in fear.  There is no guarantee that they will not be arrested on bogus charges as well.”