Authorities in northwestern China’s restive Xinjiang region have demolished the home of an ethnic Uyghur Muslim family that had served as an underground school for Qu’ranic studies, according to local officials and residents.

On March 24, officials from Qarasay town in Hotan (Hetian) prefecture’s Qaraqash (in Chinese, Moyu) county ordered some 500 local villagers to watch as workers tore down the home of Mettursun Qasim to set an example for those who support unofficial religious studies, sources said. 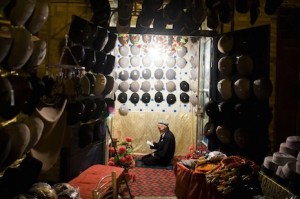 Hezim Turdi, chief of Qarasay’s Qaradong village, said he had witnessed the demolition of Qasim’s home in the Ayaghmele neighborhood of Aral village along with his local imams, or religious scholars.

“We witnessed the destruction and now we are holding a presentation for our villagers about what happened to Mettursun Qasim’s house, in accordance with an order from the township government,” Turdi told RFA’s Uyghur Service.

He said Qasim’s home had consisted of three bedrooms and a kitchen, as well as a small yard, and that one of the bedrooms had served as a classroom for teaching the Qur’an.

“The whole house was smashed up by an excavator and a bulldozer,” he said.

“The higher level authorities wouldn’t allow us to take photos, but ordered that we widely spread knowledge of the consequences of underground Qu’ran teaching to the villagers.”

A resident of Aral village, who spoke to RFA on condition of anonymity, said neighbors were only able to remove a sack of wheat, four bags of flour and some bedding from the house before authorities proceeded with the demolition.

“The rest of their belongings, including their cooking utensils and curtains, ended up buried under the walls and roof,” he said.

“The officials repeatedly announced, ‘These are the consequences of disregarding government orders and supporting illegal activities,’ as the house was knocked down, so the people were afraid of revealing their pity for Mettursun Qasim.”

Qasim, a 27-year-old farmer, and his wife, 25, had been detained a month earlier for allowing the Qu’ran studies in their home, while their three children — two of whom were students at the unofficial school — were relocated to live with their grandparents nearby.

Officers who answered the phone at the Qarasay police station did not deny that the demolition had taken place, but refused to provide details about the incident or answer questions about the detention of Qasim and his wife.

According to Turdi, the unofficial school had nine students, aged seven to 22 years old.

Police exposed the school around two weeks after classes began there in the middle of February, he said, and charged four of the students — aged 17-22 — with “endangering state security” at a public trial in Qarasay on March 21.

The four students were among 25 people — including Qasim, his wife, and the school’s instructor, 25-year-old Eli Weli — tried that day on similar charges for teaching Islamic religious studies, sending their children to schools that offered such classes, or attending the classes themselves.

Metturdi Nur, the security chief of Qoshterek village, told RFA that a verdict had yet to be issued in last week’s trial.

He also questioned the heavy-handed response by authorities to the unofficial classes taught at Qasim’s home, though he acknowledged it came amid an ongoing “strike hard” campaign in Xinjiang aimed at fighting separatism, religious extremism and terrorism.

“The students were only reading and memorizing the Qu’ran in the class, and learning the basic rules of prayer — they were revealed very early by police before moving on to other forms of study,” Nur said.

“It wasn’t clear what the ultimate goal of the teacher and his supporters was, but the classes began at a time which indicates some kind of bad intent or, at the least, resistance to the policy against [unofficial] religious activities,” he said.

“That is why the higher authorities took the classes so seriously and punished them heavily.”

A second Aral villager, who also asked RFA not to reveal his name, said he did not believe the Qu’ran instructor or any of the students’ parents had any political motives in setting up the school.

“Eli Weli and Mettursun Qasim are both family men with quiet personalities — I have known them since they were children,” he said, adding that the teacher had agreed to teach Qasim’s sons as a favor to him, and had not refused to include the other students when they approached him.

“Their actions simply fit the needs of authorities, who are looking to set examples during the strike hard campaign.”

Turkic-speaking minority Uyghurs, who are the targets of the campaigns, have complained about pervasive ethnic discrimination, religious repression and cultural suppression by Chinese authorities.

Last October, authorities tightened up rules forbidding anyone under the age of 18 from following a religion, targeting families whose children studied the Qu’ran or fasted during the Muslim holy month of Ramadan with hefty fines.

Authorities in the Hotan, Kashgar and Aksu prefectures of Xinjiang forced Uyghur parents to sign pledges promising not to allow their children to participate in any religious activities, the exile World Uyghur Congress (WUC) group charged at the time.