Authorities in the violence-prone Xinjiang Autonomous Region of China are sparing no measure in their crackdown on existing terrorists, and through a recently proposed policy, may even be trying to stem the birth of future terrorists. After a series of anti-terrorism efforts have repeatedly failed to stem the ongoing violence, a recent article in the party political theory journal Qiushi suggests Xinjiang may soon adopt limits on the ability of ethnic groups to bear children. According to the article by Zhang Chunxian, the western province’s Communist Party chief, Southern Xinjiang will “implement family planning policy equally on all ethnic groups, to lower and stabilize an appropriate birth rate.” 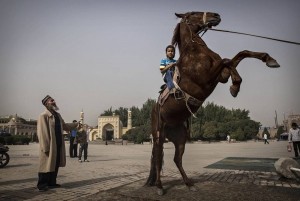 Some say the policy is targeted at the growth of the Turkic-speaking Muslim Uighur population, members of which have been blamed for recent violence throughout the region and in other areas of China. Uighurs represent the largest ethnic minority within Xinjiang with more than 45 percent of Xinjiang’s 22 million people. The region has long been traumatized by violence that the government blames on Islamist militants or separatists, who it says want an independent state called “East Turkestan”, or “Uyghuristan” modeled after neighboring Central Asian nations. Two “Eastern Turkestan Republics” survived between 1931–34 and 1944–49, and Chairman Mao Zedong, partly to win over Turkic speakers in the territory, even promised “self-determination” and the right to secede from the Communist state, before withdrawing the offer and eventually conceding the title “Xinjiang Autonomous Region” in 1955. Notably, the Uighurs, although constituting the majority of the population, were not ceded any autonomous localities as were other minorities as the Kazak, Kyrgyz, Hui, Mongols, Tajiks and Xibo.

If implemented, the population control measure would be the latest in a series of restrictions placed this year on the Uighurs, including restrictions on the practice of Islam, monitoring computers for “violent Internet content,” the offering of cash rewards for helping track down terrorists, mass sentencing rallies, and prohibitions on riding buses for those with beards, veils or burkas.

The proposed policy is markedly different than previous rules which allow Uighurs to have as many as three children in the countryside, in contrast to the two children allowed for the majority Han Chinese. In the populated urban areas, Uighurs can have two children while Han Chinese are in general only allowed one.

The latest measure to control the Uighur population follows one of the worst incidents in years, when on July 28, the Xinjiang government reported 59 “terrorists” were gunned down by security forces in Shache county in Xinjiang’s far south, with 37 civilians killed in the attacks. Three days later, the government-appointed head of the Id Kah mosque in the far western city of Kashgar was killed after leading morning prayers.

Violence this year has been particularly disturbing, following a suicide bombing May 22 at a morning street market in Urumqi, which killed at least 39 people and wounded dozens. Other attacks include the stabbing of six people earlier this month at a train station in Guangzhou, a suicide bombing at the end of April at the Urumqi train station, and stabbings at the Kunming train station in March. The violence has also included a fiery vehicle crash at Tiananmen Square in October.

The latest proposal by the Xinjiang party chief smacks of clumsiness and desperation, much like the bans on fasting during Ramadan throughout the region, or the reports coming from Kashgar of a local initiative known as Project Beauty, where guards at mobile checkpoints detain women whose clothing looks too Islamic. The suggestion by the western province’s Communist Party chief to “lower and stabilize an appropriate birth rate” contrast sharply with movements elsewhere in China this year to ease the one-child policy, in order to stem the ill effects on the economy of an aging population. If population control were really the desired intention of the policy, it stands little chance of being effective. With over 90 percent of China’s 1.3 billion population being Han, a slight uptick in the Han birth rate or any increase in Han migration would wipe out any decreases in Uighur or other minority populations. Petty and disingenous efforts such as these will do little to stop terrorism and will only add to a long list of discontent, discrimination and alienation among an already marginalized Muslim Uighur population.