Last week, a court in China’s far western Xinjiang region sentenced Ilham Tohti, a member of the Uighur minority, to life in prison for the crime of “inciting separatism.” The conviction of this moderate scholar elicited international condemnation; the sentence was an order of magnitude longer than those given to other Chinese dissidents. But, far from being a show of strength, the sentence is a sign of the confusion and desperation behind the government’s policies toward Uighurs. 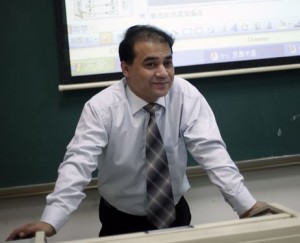 That Mr. Tohti, an economics professor and a blogger, should become a celebrated political prisoner is a paradox, for he is in many ways a poster child for what the Communist Party hopes more Uighurs will become. Educated, and eloquent in Mandarin, he was a party member from a family closely engaged with the state (his male relatives include members of China’s military and state security organs). He is professional, entrepreneurial and middle class (his family assets amounted to around $130,000 before state confiscation). He is not outwardly religious (most Uighurs are Muslims, but vary in the degree and nature of their observance). He is distinctive mainly in his outspokenness.

Though the Chinese often think of Xinjiang as a remote frontier of deserts and mountains, populated with quaint folkloric natives, it is closely linked to the rest of China and to Central Asia by an expanding transportation infrastructure; the skyscrapers, neon glow, booming commerce and air pollution of Xinjiang’s cities resemble those elsewhere in China; and although, like rural areas throughout the country, Xinjiang’s villages remain poor, the emerging middle class in the cities is scarcely different from its counterparts in other urban centers. Rapid economic development has benefited Uighurs as well as Han Chinese (each group makes up just over 40 percent of the region’s population of 21 million).

Yet the authorities seem puzzled and frustrated that, despite these economic gains, Uighurs remain adamantly Uighur. Sporadic local disturbances are endemic throughout China, but in Xinjiang they are colored by ethno-national and religious sentiments. After a relatively quiet decade, from 1998 to 2007, stability has eroded alarmingly since 2008, with a big, bloody race riot in 2009, sporadic attacks on police stations and representatives of the state and, over the past year, violence perpetrated by Uighurs against random civilians in Urumqi, the regional capital, and in faraway Yunnan Province and Beijing. Xinjiang authorities have responded to violence with an intense crackdown, including house-to-house searches, and a campaign against traditional symbols of identity: veils, head scarves, beards, traditional hats, Ramadan fasting, prayer.

Combined with the recent razing of Uighur architecture in the ancient city of Kashgar and elimination of the Uighur-language educational track from Xinjiang’s schools and universities, these measures seem aimed at repressing Uighur culture. Moreover, the authorities have now doubled down on their post-9/11 tendency to interpret Uighur unrest through a single lens — foreign-inspired Islamic “terrorism” — even when the real causes are local and political.

Continue reading the main storyContinue reading the main storyContinue reading the main story
It is unclear if China’s leaders entirely believe their own propaganda — that all Uighur troubles derive from external sources and are unrelated to government policies — but local and regional authorities certainly benefit from it: Whereas common people elsewhere in China enjoy some de facto freedom to protest official and business malfeasance, Uighurs enjoy no such latitude. In the absence of a free press, Beijing has few sources of on-the-ground information in Xinjiang other than its own self-interested and self-protecting local officials, who can readily justify their mistakes and abuses in the name of fighting “separatism, extremism and terrorism.” No surprise, then, that it was the authorities in Xinjiang, not Beijing, who were most eager to prosecute Mr. Tohti, for he has been arguing that Chinese policies themselves, not simply cyber-radicalization, have been engendering Uighur resentment and violence.

Yet by condemning Mr. Tohti, Beijing has not only subjected itself yet again to international opprobrium, but has denied itself a critical Uighur viewpoint and an alternative approach to the deteriorating situation in Xinjiang. Before it was shut down, Mr. Tohti’s Uighurbiz website was a forum for Han and Uighur contributors to discuss Xinjiang issues, bridging the two communities; the need for more interethnic communication was a theme when the Communist Party issued revised Xinjiang policy guidelines last May.

Most important, Mr. Tohti pointed out that China’s own existing laws could protect minority cultures — if only they were observed. He did not call for a radical American-style democratization, but rather for the protection of indigenous institutions — support for non-Han cultural expression, job opportunities and truly “autonomous” government administration — that is enshrined in the Chinese Constitution and a 1984 law.

This system of “ethnic autonomy” was indirectly derived from the pluralist (though not democratic) ideology of the Qing empire (1644-1911), which first brought Xinjiang, Tibet, Mongolia and Taiwan under Beijing’s rule as a “great family under Heaven.” Though superficially resembling the system of national republics undergirding the Soviet Union, the system developed by the People’s Republic of China differed in substantial ways and was adapted to Chinese conditions and outlooks. It functioned successfully in the 1950s, when Xinjiang was designated the “Xinjiang Uighur Autonomous Region,” and again in the early 1980s, and it remains popular with minority groups even though they have never been afforded real autonomy. Far from “inciting separatism,” Mr. Tohti was advocating a return to foundational promises dating to Mao’s era.

Management of diversity and pluralism is a pressing world issue, from Scotland to Ukraine to Ferguson, Mo. China has an opportunity to contribute its own fixes to the bugs in the nation-state model, but cannot do so by locking up its most creative and courageous thinkers.

James A. Millward, a professor of history at Georgetown, is the author of “Eurasian Crossroads: A History of Xinjiang” and “The Silk Road: A Very Short Introduction.”