KAYSERI, Turkey (AP) — Iminjin Qari felt upbeat as he drove to Istanbul’s airport with three empty buses and a simple task: pick up about 200 fellow Uighurs who had fled China for asylum in Turkey — and escort them to safety.

But 20 burly Uighurs — recruiters for Islamic militant groups — were already there, greeting the refugees as they trickled out. “Just come with us,” the men said. “It’s all arranged: housing, money, everything.”

Qari’s heart sank as he watched the new arrivals — men, women and children — follow the recruiters toward the paradise they had been promised: Syria.

As Uighurs flee a stifling Chinese security crackdown in droves, they often end up caught in a tug-of-war between militant Uighur members of Syria-based Islamic groups and moderate leaders of the Uighur diaspora who plead with them to reject calls of jihad.

Extensive Associated Press interviews detail the daily battle some Uighur activists are fighting against the radicalization of their people, members of a Muslim ethnic minority who live in western China under heavy surveillance and the constant fear of arrest.

The war in Syria has thrust this ethnic minority from China into the center of the global jihadi movement. Several thousand Uighur men, women and children are estimated to have crossed the border from Turkey to join the Turkistan Islamic Party (TIP), an ethnic Uighur militia allied with al-Qaida on the front lines of the fighting. 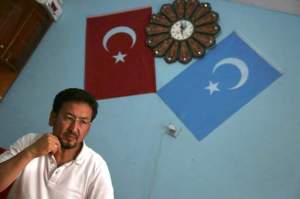 “We are losing the deradicalization battle,” said Seyit Tumturk, a moderate Uighur activist, said in a recent interview in Kayseri. “Why? Because we cannot convince our people that hope and human rights exists in the world.”

Around the time Qari watched the jihadi recruiters whisk Uighurs from the airport in 2015, the TIP announced a string of suicide attacks in Syria. That September, Uighurs bombed a downtown Bangkok shrine filled with tourists.

The spread of extremism has alarmed many exiled Uighur leaders, who condemn violence and say it will lead their people’s ruin. But they face a young generation who see no future under one of the world’s most powerful authoritarian governments and feel ignored by the rest of the world.

The Uighurs are wrestling over age-old questions: Do we seek freedom with peace or violence? Is our path forward secular or Islamist? Who will help us face the might of the People’s Republic of China?

On the outskirts of Kayseri in central Anatolia, a fenced compound of five-story concrete towers represents Tumturk’s vision of Uighur freedom — and everything China is not.

“Here is a place where they can practice their religion, where kids are going to school, where they have a home. This is our triumph,” said Tumturk.

Tumturk works with Qari, a gregarious 35-year-old who serves as imam and building supervisor to the Uighur community that now numbers more than 2,000.

When Qari leads Friday prayers, he throws in cautionary tales about Syria, warning that there was a group of 10 Uighurs who tried to quit the Islamic State last year and were executed.

In Istanbul, Adil Abdulghupur, a self-trained religious scholar forms a duo of sorts with Sabir Damolla, a former importer who runs an afterschool center and soup kitchen. They lecture at mosques, weddings and funerals and appear on Istiqlal Media, a Uighur-language television station.

Their message is singular: Stay away from Syria.

Whenever Uighur refugee families, often poorly educated, arrive in Istanbul, Adil and Damolla sit with them to explain what’s happening in Syria. By Damolla’s count, they’ve talked 400 people out of going to Syria and convinced dozens to return. They personally know at least 30 who died on the battlefield.

Because of his speeches around the neighborhood, Adil has been pushed around by muscle-bound Islamic militants outside mosques. He received a death threat by phone after he ridiculed an influential Saudi cleric in Syria.

Last year, local Uighurs pooled money together to help Adil rent 18 apartments in Sefakoy for several dozen families who regretted going to Syria. A group of threatening young Uighurs showed up, but Adil held firm, explaining that some fighters had wanted to return.

“These men in Syria will ruin our image, they’ll ruin everything,” Adil said. “The Chinese government through their media and diplomats try to show that Uighurs are terrorists, and, in that sense, the Chinese are winning.”

Even in the relative sanctuary of Turkey, Uighurs say they are isolated economically and engulfed by murky political currents.

While Turkey has welcomed Uighur refugees, the bureaucracy churns against them after they arrive. Uighurs are considered stateless under Turkish law, unlike refugees from Syria or Iraq, and often unable to receive work permits, health insurance, or schooling for their children.

Men work — if they’re lucky — in local furniture factories and restaurants for about 1000 to 1,500 Turkish lira a month (roughly $300 to $440), far less than what a Turk would legally make and barely enough to survive.

Nearly all the residents AP spoke to know someone who decided to cross the border into Syria. They spoke on condition of anonymity or gave one name for fear of retribution against their families in China.

Fatima, 29, raises 3 children on flour, rice and vegetables. She recently explained to her 11-year-old daughter in seventh grade that because she was not officially a refugee, she didn’t receive certificates from school despite outperforming all of her classmates.

When her girl asked why they fled China to still live as second-class citizens in Turkey, she put on a brave face.

“Turkey will protect our freedom and our religion,” she said. “This life is better.”